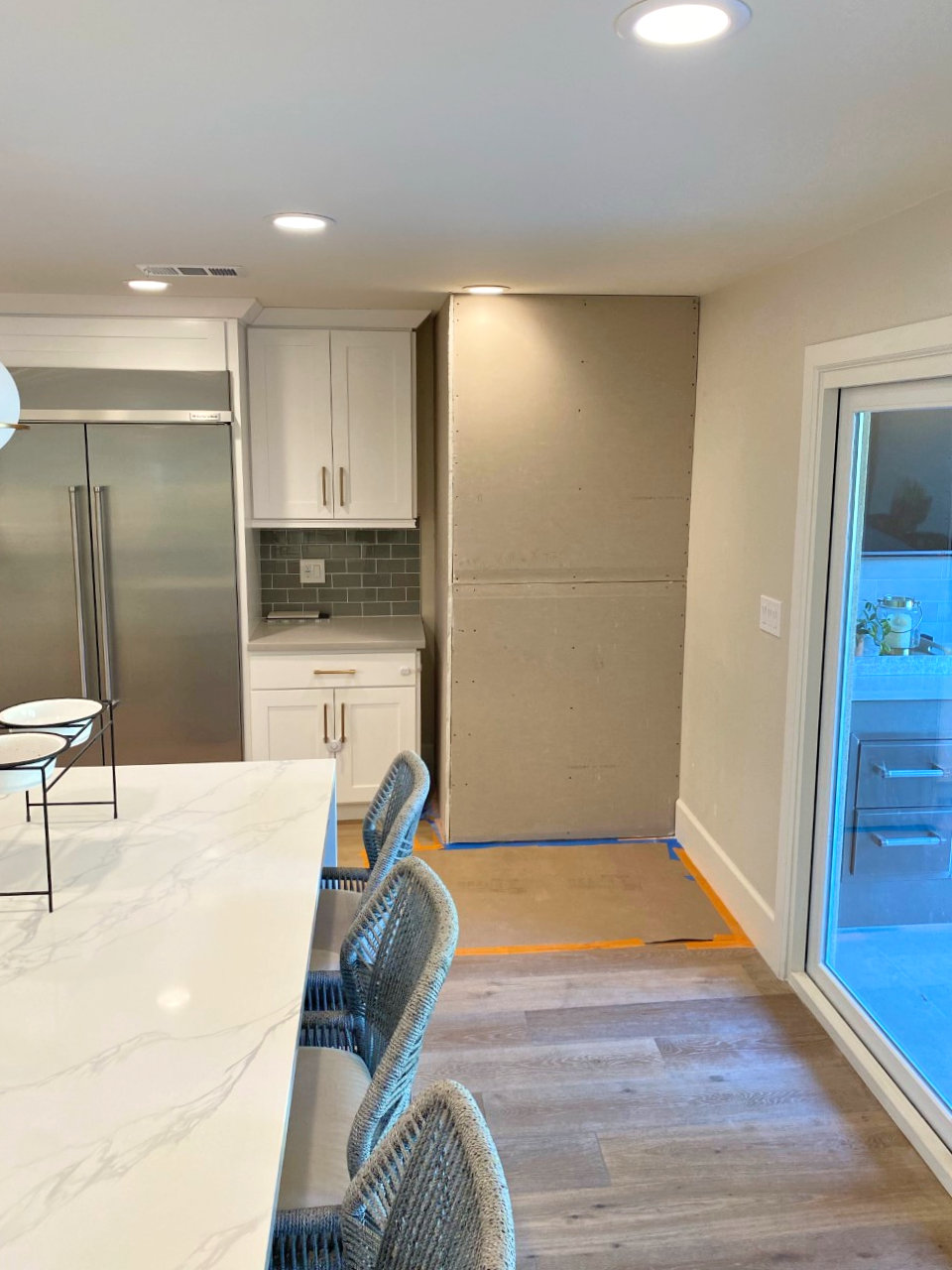 I’m back with another reader question today. Good news, though. Matt is feeling much better, so I’ll probably be able to get to my projects today, and may even have some progress to share with you tomorrow. In the meantime, Jackie needs help with suggestions for handling this drywalled bump out area in her son’s house. Here’s what she says…

My question is about my son’s house.  He lives in Santa Ana and he is converting his house to include an in-law suite.  The issue is they are making room for a washer and dryer in the in-law suite and now this awkward “box” is sticking into the kitchen.  What suggestions do you have to make this look more integrated?  It’s obvious they are going to have to either bring the box closer to the cabinet to the left of it.  They are not against removing the cabinets next to the fridge.  They have talked about a desk there or a wall oven.  However they really don’t need the oven.

Here is the drywalled box bump out in the kitchen of Jackie’s son. This was created so that there was a space for a washer and dryer in the in-law suite on the other side of the kitchen wall, but now that addition has left this boxed area in the corner of the kitchen.

And here’s a better look at the cabinets that Jackie says her son would be willing to remove.

And then here’s a view from further away. You can see that those cabinets are now tucked in between that dyrwalled bump out and the refrigerator, so they’re looking a little squished in there.

My very initial thought that I had as soon as I saw this picture (and I mean immediate though, as in, it jumped right out at me) was that I would (1) brick that drywalled bump out to look like it’s the back side of a chimney, as if there’s a fireplace on the other side, and then (2) remove the cabinets and put floating shelves in that area. Since your son is willing to put a wall oven there that he doesn’t really need, that says to me that he doesn’t really need that storage space. So I’d make it open shelves. He can put pantry items that can be stored in jars, framed artwork on little easels, etc.

If you go to Pinterest or Houzz and search “exposed brick chimney in kitchen”, you’ll find example after example of people having to work around a brick chimney in their kitchen. And while your son’s situation clearly isn’t a chimney, I’d personally make it look like that’s the situation you’re working with.

Here are a few examples of kitchens where people have had to work around brick chimneys. This one has cabinets, but the bricked area doesn’t extend out into the room as far as the drywalled bump out in your son’s kitchen. So I would recommend removing the cabinets and doing something different. But you can see how they worked around the chimney.

Here’s another example of a brick bump out in the corner of this kitchen, and they just built around it.

And here’s another one…

Of course, none of these are going to show the exact layout in your son’s kitchen, but these just give you some visuals to see that not only have people worked around inconvenient bump outs in their kitchen, but so many of them embrace it (because most of them are actual chimneys) and leave the brick exposed as an accent in the room. And while all of these show red brick, there’s no need for it to be red brick. If you prefer something more neutral, go neutral.

So if it were mine, that’s how I would treat it. I would rather people look at it and think, “Oh, I love how they incorporated the brick from the fireplace/chimney into the kitchen,” rather than, “What a strange drywalled bump out. I wonder why they had to encroach into their kitchen like that.” It’s not unusual at all to see bricked columns from chimneys going through a kitchen or the middle of a room, so I would run with that.

And then the reason I suggest floating shelves in that area is because they will keep the area kind of visually open, rather than closing off behind more drywall, or adding a column of appliances that aren’t really needed. And floating shelves can be built as deep as you need them, so they can be brought out so that the front edge of the shelves is flush with the front of the refrigerator enclosure on the left. That way they don’t get lost in that space between the refrigerator and the bump out, and it provides some usable storage space as well as space to put some nice decorative items that can draw the eye away from the bump out.

And of course, the trim — both the crown molding and the baseboard — needs to be carried around onto the bump out. That will help to incorporate it into the room more, and make it look like it’s always been there rather than it being a new addition to the corner of the room.

Alright, folks! What suggestions do YOU have for Jackie?

(Are you stuck with a DIY or decorating problem and want input? Click here to submit your question. I post/answer the questions in the order that they’re received, so please don’t send questions if your contractor is on the way to your house right this minute and you need immediate advice. 😀 )