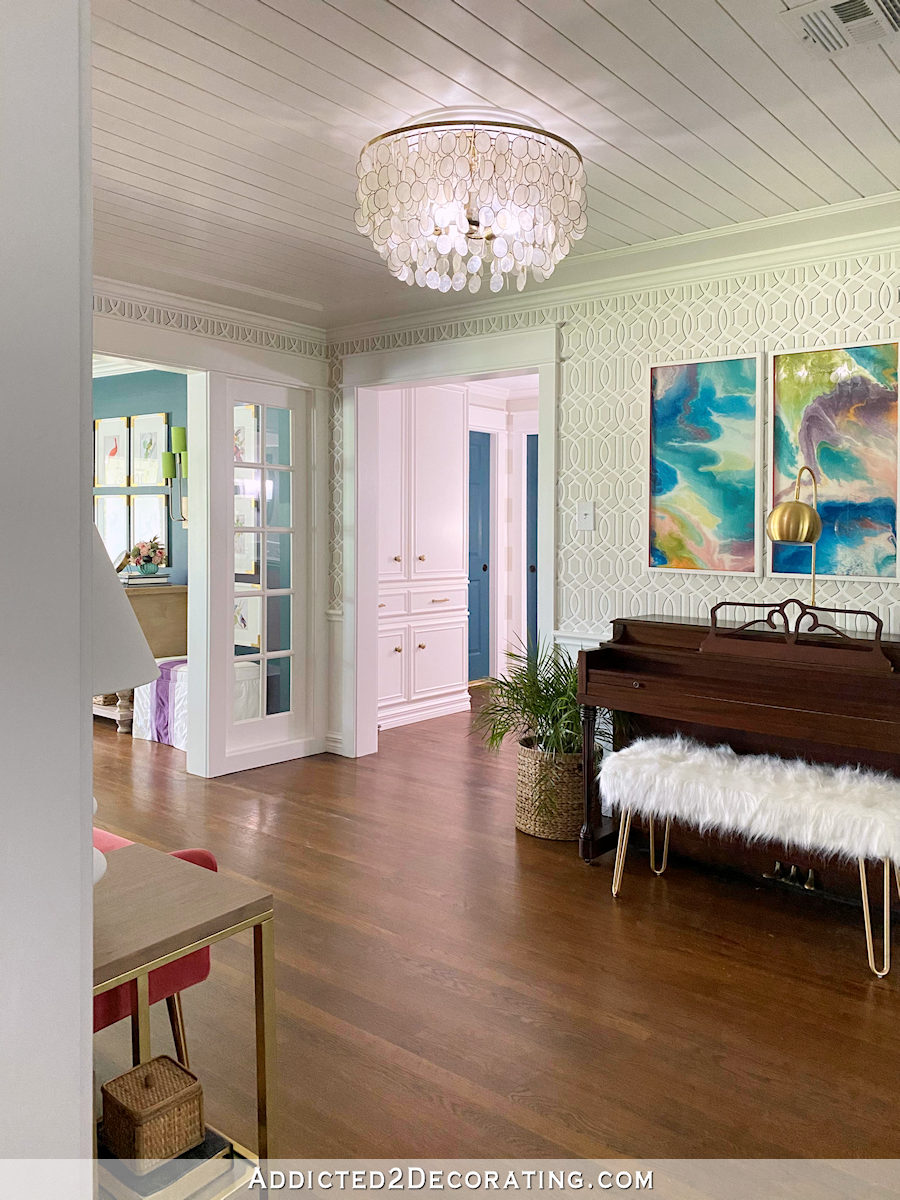 First, a quick update: Matt had a great weekend, and that means that I was able to get some work done. I’m *this close* to finishing the bathroom floor (just need to do a bit of cleanup and grouting today). That means that I can move on to building the cabinet in the toilet area and installing trim this week! But for today, I wanted to answer a DIY question about how to refinish the hardwood floors in a house one room at a time and have them blend together when they’re finished. I was excited to get a DIY question in the trove of mostly decorating questions, so I wanted to address this for Paula. Here’s what she wrote:

This is much more a DIY procedure question than a decorating one, but a workable answer will change my life and help me move forward into this smaller home which is mortgage free and allow me to sell the larger house.

A 10-year process of necessary renovations of my dream house came to a abrupt halt almost 10 years ago when my husband Leon was diagnosed with cancer.  That was a many years long medical treatment and surgery that culminated in his release to his heavenly home in 2016.  Most of the house was completed prior to his diagnosis, leaving stripping and refinishing of the solid 50-year-old pine floors yet to be done. My own health seriously cratered about two weeks after his home going and had not fully recovered partly due to Covid infections (3) over the last two years.  Those years ago I had originally planned to refinish all the floors at once because of advice to do it all at once or the “seams” going from one room to another would be impossible to make presentable.

My question is obviously is “How did you, Kristi, transition the finish/top coats from the flooring in your room that was finished years ago to the new flooring in the hall butting up to it?  I am at a point in recovery that I feel I can prep, sand and finish two bedrooms and the closets in order to actually move into that house, then tackle other rooms as I am able.

Here’s how I would handle this floor refinishing situation:

It is true that if you can refinish all of the hardwood floors in all of the room at one time, you’ll probably get a better result without any chance of having “seams” from one room to another. That’s what I did the first time I refinished our floors right after we closed on our house in August 2013.

I’ll have to admit that it was very nice starting on the bedroom side of the house and literally working my way out the front door, getting all of those floors done in one start-to-finish process.

I had the luxury of doing it that way because we hadn’t yet moved into the house, and I was fully of energy and excitement to get it done. I had that “nothing’s going to stop me” attitude, and since we weren’t really on a time crunch (we had no concrete move-in date, so I could have taken as long as I needed), I was able to do it this way.

But I also know that’s not always possible. For people who are already living in their homes and needing to shuffle furniture from one room to another to get the floors done, they have to be done one room at a time.

I also had this situation when we needed to replace the floor in the hallway (including the subfloor) after the crap geyser episode in the hallway bathroom. After that incident, the bathroom floor was fine (thank goodness for impenetrable tile), but the hallway floor wasn’t. So it all had to come up and be replaced.

So once all of the new flooring was installed, I had the challenge of making this floor match the existing refinished floor in the adjoining music room.

At this stage, this project was a little different from what Paula describes in her house since this was new flooring and there was no RE-finishing necessary. I only needed to finish the floor. But many of you will remember that my initial attempt to stain the floor and get it to match the music room floor was a total fail.

The color didn’t match at all. So this left me in a situation that is probably very close to what Paula has right now, where I only needed to sand and refinish the hallway floor, while leaving the music room floor intact, and making the two floors match in the end.

Since my hallway floor is so small, I chose to sand the whole thing down with a hand held belt sander. But had this been a standard size bedroom, I would have rented the big floor sander and edge sander and sanded the floor as normal.

But the question here is about stopping one floor, and then starting the adjoining floor at a later date. So here are the steps I would use.

First, pick out the board you want to end the initial refinishing on. For example, if the first room you want to refinish is a bedroom, then you’ll choose a board that’s in the doorway of the bedroom. Using painters tape, tape off around that board like I’ve done below so that you have a visual of where the first phase of refinishing will stop.

If you have a situation where the boards aren’t going in the right direction to form an easy transition between one room and the next, like I had in my situation…

But instead, they’re going the opposite direction so that there’s no easy transition from one room to another…

I would still tape off around individual boards. Instead of having a straight line in the doorway, you’re going to have a situation where your taped off area looks more like a city skyline, but that’s how I would approach it. In other words, you want to make sure you refinish whole boards at a time rather than prioritizing stopping and starting your refinishing projects in the doorways between rooms. If you have that second situation above, and you arbitrarily choose a stopping point that cuts across all of the boards in the doorway, then you’ll definitely have a seam where one finish ends and the next finish begins.

As an example, if I wanted to refinish the floor in my living room/entry, but I didn’t want to do the music room right now, my tape like would look something like this…

But if I were to take one continuous piece of tape straight across, cutting across boards, to transition from one room to another, the final result would look awful.

Worst case, it would be obvious that the floors were refinished at the same time, and that that line was your starting and stopping point. Or it would look like the flooring installers decided to cut all of those boards so that they ended at exactly the same spot, which would look awful and amateurish because hardwood floor boards are supposed to be staggered. Either way, the final result would be undesirable. So stick with taping off whole boards, and not focusing on the idea that the transition has to stop and start in the doorway.

It’s natural for individual boards in a hardwood floor to be varying shades, though. (Just look at the floor in the picture above. Some boards are darker, others are lighter. That’s natural.) So if there’s a slight variation in the finish of the floor in the initial room, and the finish when you refinish the adjacent room, it will be a whole lot less obvious if you finish whole boards at a time rather than taping across boards.

Next, I’d sand the floor just like usual, using a big floor sander and the edge sander. But the key is that when you get to your taped area where you want to stop the project during this phase, put the sanders away and grab a hand scraper for hardwood floors instead.

These things are so handy for getting the old finish out of corners that can’t be reached with the round edge sander, but they’re also great for this purpose. Because they’re small and easy to control, you can scrape the old finish off right up to the very edge of your tape.

Use the scraper to finish up the process of removing the old finish right up to your transiton. Once you’ve got the whole floor sanded, and the old finish removed up to the transition marked by the tape, you’ll want to replace the tape with fresh tape since the original tape will have worn and torn edges by now. This will be a real pain if you have the “skyline” transition, but don’t skip this step.

After you have new tape down, move on to the staining and sealing process. Once you get the last coat of clear sealer on the floor, remove the tape on the transition while the sealer is still wet.

I had great success using this method in my hallway. Now that it’s almost been a year since I finished the hallway floor, I almost never give it a thought. It seems like the two flow seamlessly with each other, and I don’t think any visitor to my house would ever know that the two floors weren’t finished at the same time.

Shop Tour 2018, All of My Woodworking and Metalworking Tools!
How to Raise Chickens | The Home Depot
BUDGET ROOM MAKEOVER IDEAS || Decorating and Organizing Hacks
10 Tips to Revamp Your House on a Budget #8: Playing with Light.
How To Use Pex A Pipe