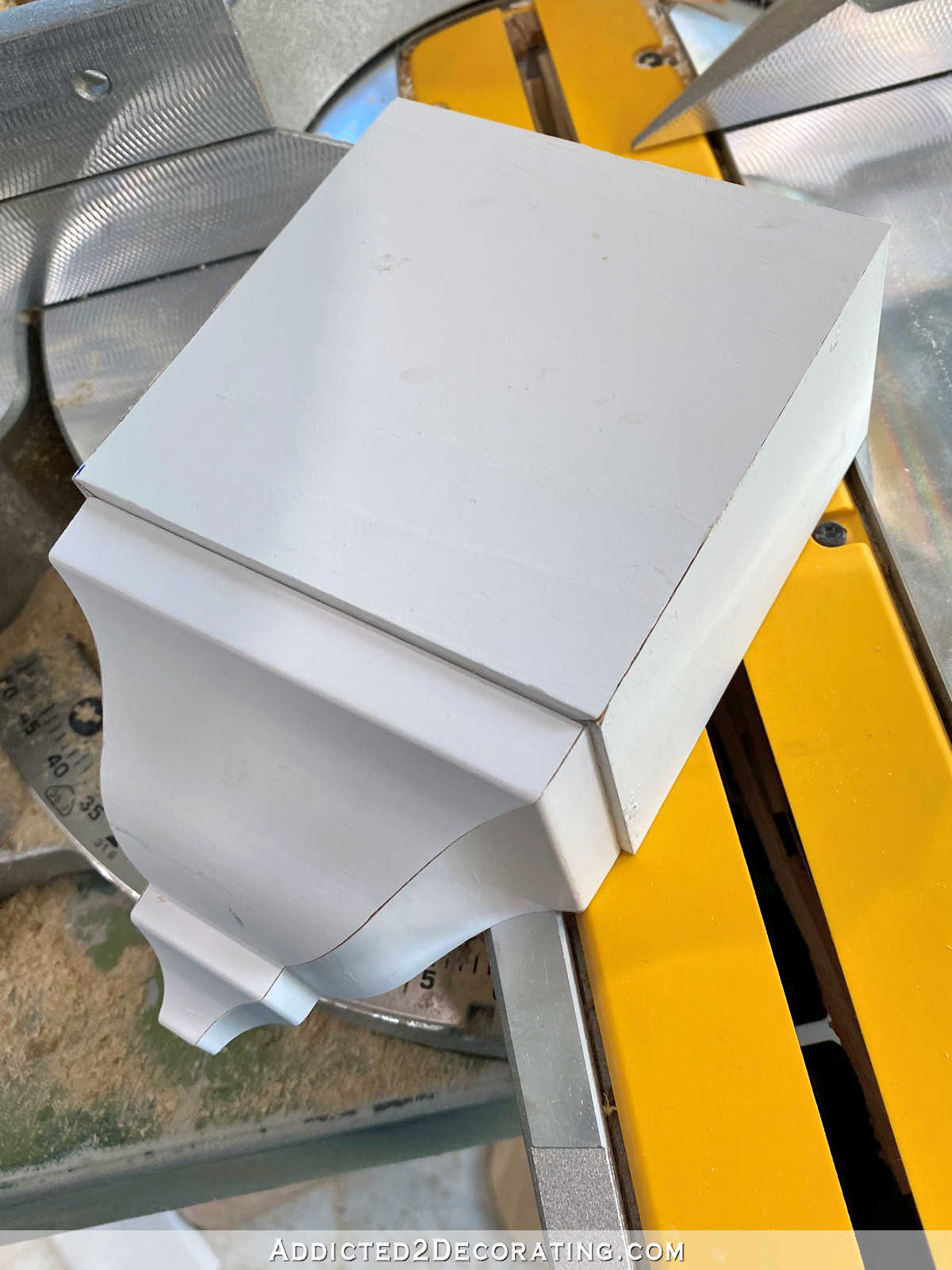 I spent yesterday afternoon working on my ideas for how to dead end crown molding in our master bathroom so that I’m not stuck with awkward hanging returns or plain boards dead ending into the ceiling. If you missed that whole discussion about the trim issues I was dealing with in this bathroom remodel, you can read about that here. One of my ideas was to make a DIY mid molding block out of the crown molding that I’m using in the rest of the room, so yesterday I got to work figuring out how to make these myself, and here’s the first one I got finished…

Doesn’t that look good?! I was so proud! But let’s not discuss how much crown molding I wasted in order to figure this thing out. 😀 It’s a good thing I happened to have lots of crown molding on hand that I had bought for our home gym (which I’ve decided not to use in there), so I could have lots to practice on, because this took a ton of trial and error.

But here’s the first mid molding block attached to the top of the left transition board.

And then you can see how the crown molding will dead end into this mid molding block.

I made all four of them, but as it turns out, I’m going to have to make all four all over again because of an issue that I didn’t foresee, which I’ll explain down below. But at least now I know how to make mid molding blocks, so these were really good practice. My final four will be even better!

So let me show you how I made these mid molding blocks.

First, I cut the pieces for the box that forms the block at the the top. I used 1″ x 4″ pre-primed lumber, and stood it up on end so that I could cut the edge at a 45-degree angle.

And since I wanted my mid molding block to fit perfectly at the top of a 1″ x 5″ board (which is actually only 4.5 inches wide), I measured over 4.5 inches and made a mark.

And then moved my blade to the other side and cut that side at a 45-degree angle. This gave me the front piece for the top box/block.

To make sure that it was the right width, I placed it against the transition board. It’s best to check at this stage before moving on.

Then I cut the side pieces to form the top block. The side pieces had a 45-degree angle on one side, and a straight cut on the other side. I made these 2.5 inches wide.

With those pieces cut, I was ready to assemble. I assembled my pieces using a hot glue gun. Every woodworker should have a big, high temp hot glue gun in their tool box. Nothing is better for quick assembly on things like this.

Next I was ready to cut the crown molding pieces. I thought this was going to be so easy to do! I was wrong. 😀 It took me forever to figure this out, but I was determined. I finally did figure it out, so here’s what I did.

To cut the front piece, I set the blade at 45 degrees to the right. Then I set my Kreg Crown Molding jig to the left of the blade, placed the crown molding upside down on the jig, and made a cut on the end of a long piece of crown.

And here’s what it looked like on the back…

Now if you’re making a box that’s wider than 4.5 inches, you probably won’t have that perfect point on the bottom of your crown. I honestly don’t know because literally none of this math (algebra, geometry, trigonometry, or whatever calculations go into figuring this out) make any sense to my brain. I literally just cut and cut and cut and cut until I figured out what works for my particular molding. I wish I could give you some formula like, “If your crown molding is this wide, and has this spring angle, and your top block/box is this wide, this is where you need to cut,” but my brain doesn’t work that way. I just cut and cut and cut again until I end up with a heap of crown molding scraps, and one that finally works that I can replicate.

Next I needed to cut the sides, and just like the top box, the side pieces needed an angle on one side, and a straight cut on the other.

So I set up my saw with the blade to the right at a 45-degree angle, the crown molding jig on the left, and my crown upside down in the jig, and I made a cut on the end of the crown.

Then I moved the crown over about 4 inches just to give myself enough room to work with and cut. Then I set my blade to the other side and cut the piece for the other side. Here’s what I ended up with…

In the photo above, the angles I needed to keep are the two inside angles. The two outside angles on these pieces were just junk cuts to cut off the excess crown molding so that I wouldn’t have such large pieces to work with.

Next I needed to cut the straight cuts on each piece. And because I wanted these pieces set in 1/8 inch from the top box, and the side pieces of the top box was 2.5 inches, I measured and marked these side pieces at 2 3/8 inches.

I used my speed square to mark the straight line on these pieces (I enhanced the marks with my photo editor) so that I could have more than just one tiny mark as a guide.

And then I set my saw to 0 degrees and cut a straight cut along those marks. Here’s what the side pieces looked like…

Then I was ready to assemble using my hot glue gun, angle against angle, and straight cut to the back.

And here’s all three pieces assembled…

After that, the whole piece needed to be cleaned up with some sanding, and this little point at the bottom needed some wood filler and sanding to make it look clean and even.

And here’s how the whole assembled mid molding block looks from the back.

I put two of them in place temporarily with a dab of hot glue just to see what they look like, and while I love the look, and I’m so proud of how the turned out, I noticed a problem right off.

The left vertical transition board is a 1″ x 5″ board standing all alone. The right vertical transition board is a 1″ x 5″ that has been treated more like an actual door jamb, with a door facing attached to it on the mural side of the wall. And that door facing piece has been installed like I install all of my door and window casings with a 1/8-inch reveal of the edge of the door jamb. With one vertical board standing alone, and one being treated like a door jamb with a casing, the two sides are different widths and don’t look symmetrical. And the addition of the mid molding blocks accentuates that quite a bit.

So that’s a new problem that I didn’t foresee. It’s all an easy fix, but it’s a time-consuming fix. Unfortunately, it will require me to make all new mid molding blocks, and it will require some reworking of the vertical boards and other trim that’s already installed, but I’m okay with that. I have to get this right. The good news is that I think I’m heading in the right direction, and making these four mid molding blocks was really good practice. I learned something new, and that’s always a good thing. So once I iron out these details, I think they’ll look great!

10 Tips to Revamp Your House on a Budget #8: Playing with Light.
How to Clean a Dryer Vent | The Home Depot
Smoke and carbon monoxide detectors expire #shorts
How to Layer Cricut Infusible Ink Sheets with Pens
Is Farmhouse Style Out for 2022? | DIY Home Decor Ideas For Old Farmhouse Decor