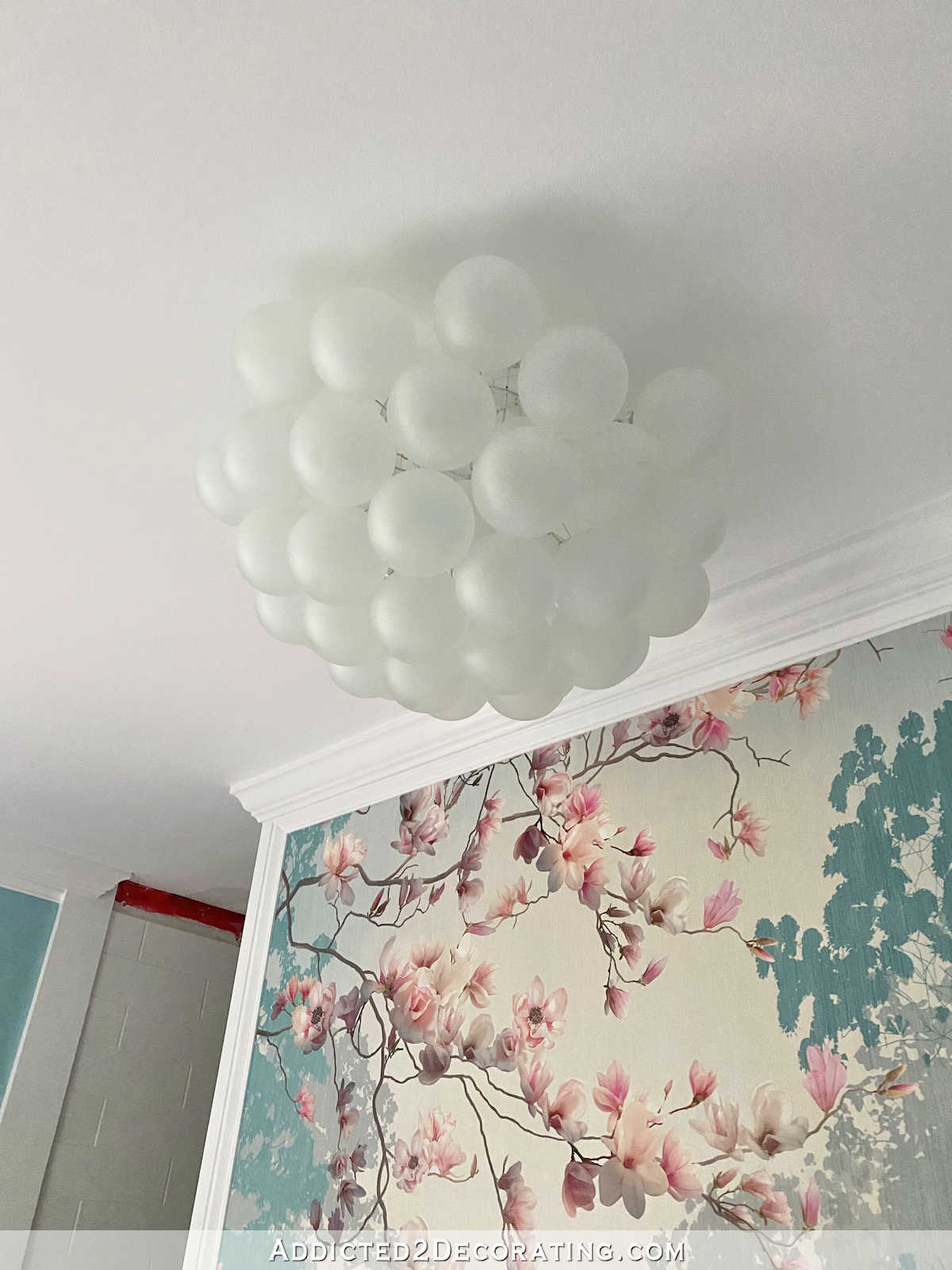 I’m really trying to stay focused on working on the bathroom instead of getting sidetracked with other projects around the house. It’s getting difficult, though, because I’m so tired of working on trim. So while I did make progress on trim and finishing the newly installed door yesterday (which is very close to being finished), I decided to end the day with a fun, creative project. I decided to start on the bubble light that will go over the bathtub.

A bubble light over the bathtub has been part of the plan from the beginning. Remember this image I put together showing the direction for the bathroom? I added a semi-flush mount bubble light that I found online (it’s above the bathtub and kind of blends in with the mural, so it’s a little hard to see), but after having a hard time finding exactly what I wanted, I decided to make my own.

Until yesterday, the light above where the bathtub will go looked like this…

It’s the same type of ultra thin recessed light that I have in the rest of the room, and throughout the house.

So yesterday, I got out the nine boxes of large 4-inch frosted white Christmas ornaments that I’ve had tucked away since last fall (when I found them on sale at Hobby Lobby), and started working on my bubble light. What’s funny is that all of these months, every time I saw that stack of nine boxes of ornaments, I would think to myself, “There’s NO WAY I’m going to need all of those! I’m definitely going to have some extras left over.” Well, I was wrong. Not only did I need every one of those, but I could have used about three or four more boxes.

I’ve had to order more, so my bubble light isn’t finished yet. But here’s the progress so far…

I’m not going to share a tutorial until it’s finished, and I have no idea when I’ll get the ones I ordered last night. I might not get them until next week, so for now, I’m stuck with a half finished bubble light. But it’s still fun to look at!

So far, I love the light. It’s turning out better than I imagined, and was so much easier to make than I had anticipated.

I have three options here:

The funny thing is that I started off writing this post leaning towards painting the ceiling. But I think I may have just talked myself into an art project, because I’d love to see what it would look like if I could add some very subtle color to those bubbles! I’ll give it some more thought. I have a few days before my new order arrives, and I can’t finish the light until then anyway. But don’t you think a very subtle (and still translucent) color on those bubbles would be pretty?