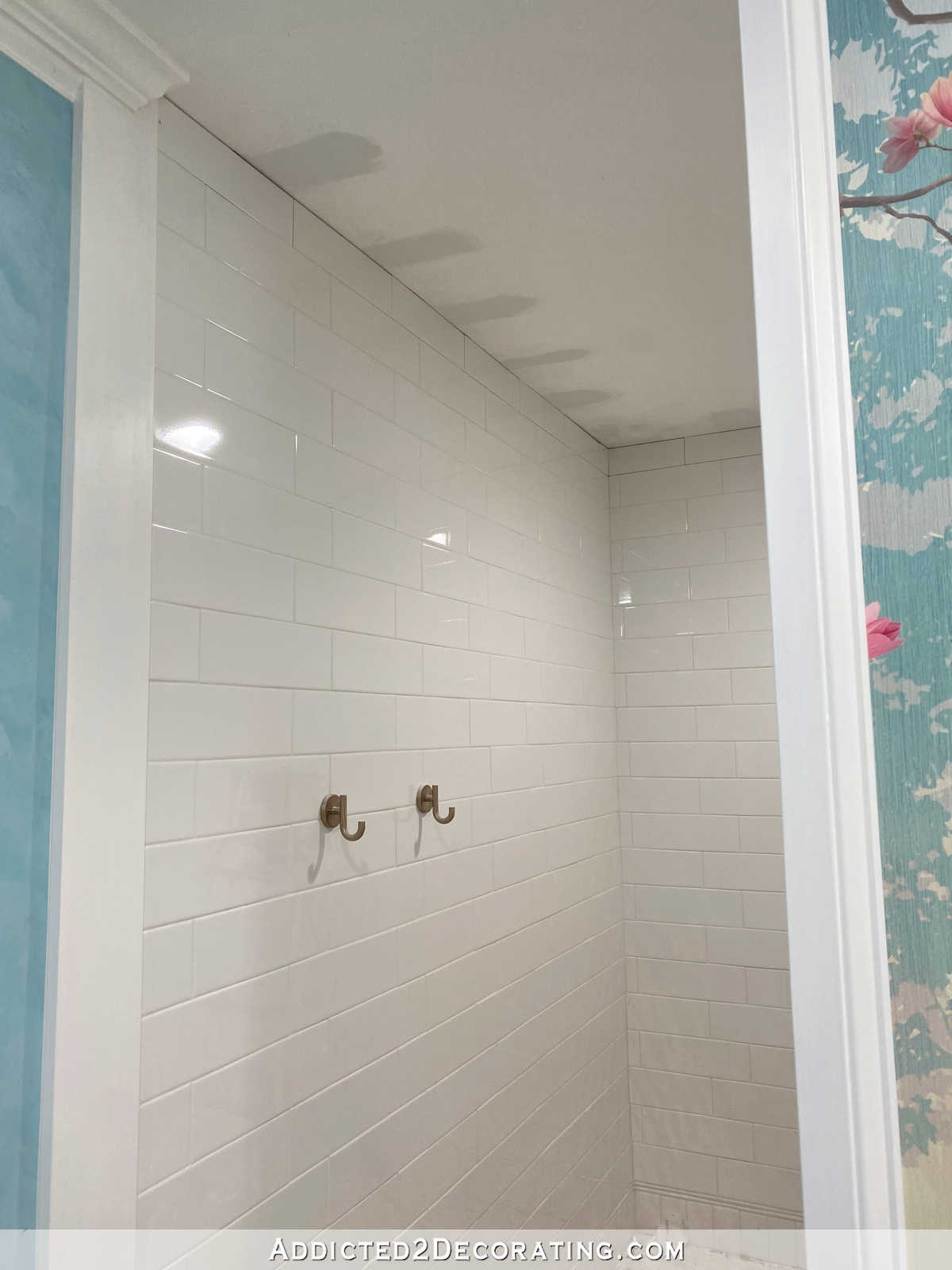 I started working on finishing up the shower yesterday. I know we were all getting so tired of seeing that red strip at the top of the back shower wall…

It’s been like that for a long time as I’ve been trying to work out just exactly how I wanted to do the trim in the room. Did I want crown molding to continue into the shower? And if so, how do I deal with that dip in the ceiling on the shower head wall?

I finally got the trim situation worked out, and that meant that in the shower, the tile would go right up to the ceiling. So with all of the details worked out, I decided to see if I could finish up that one last row of tiles yesterday.

I did make some progress. First, I had to do some sanding and priming on the ceiling to repair the damage caused by my first trim attempt that didn’t work out. And then I got started on the actual tiling. Look! No more red stripe…

Like I said, those areas on the ceiling are primed. They can be painted after the tile is installed.

But the story here is the tile. I only had one row to finish going all the way around the shower. I should have been able to finish that in one day.

So did I finish it in one day? No, I did not. I got 1 1/2 walls done, and that’s it. Why? Because I made a very stupid decision thinking that it would save me so much time, and it ended up taking about four times the amount of time than this small tiling project should have.

Since it was such a small area that needed to be tiled, I decided that I didn’t want to mix up more mortar for those tiles. Mortar is just so messy, and I hate working with it. Instead, I decided that I would take the easy way and use Musselbound adhesive mat to install that last row of tiles. (And yes, it says that it can be used on shower walls.

The stuff is super sticky, and I can see how it would be pretty amazing for most tile jobs, like backsplashes. So what was the problem I ran into? Wet/damp tiles won’t stick to it. Tiles have to be completely clean and dry in order for them to stick to Musselbound. And what was I working with? An entire row of tiles that had to be cut using a wet saw. Not a single one of these tiles was a whole tile. Every last one of them had to be cut.

I tried cutting them as fast as I could, but I mean…it’s a wet saw. If you cut tile with a wet saw, they’re going to get wet. And because of how I had to mark them, I had to cut them with the backside up, which meant that the porous, unglazed backsides of every single tile was getting most of the water.

So in order to get them to stick to the Musselbound, I had to stand there with my hair dryer on the highest setting, and literally blow dry each tile before installing it. 😀

It seemed like such an easy project, y’all! And it would have been had I not been looking for an easy way out. Had I just mixed up some mortar and installed this last row just like I installed all the rest, I could have easily gotten the entire row finished, which means that the shower would have been completely tiled before I went to bed. Instead, I tried to cut corners, which made each tile take about four times the amount of time that it should have (and that’s probably a conservative estimate), and I didn’t even get halfway finished.

I could kick myself for not thinking this through better. But this is just one more “live and learn” warning that I can pass along to all of you. You’re welcome. 😀

But at least I got rid of the red stripe, and once it’s all grouted, and the ceiling is painted, I think it will look very nice.

In other news, I’ve been searching high and low for a curtain rod to use in the shower so that I can hang a shower curtain. I know some of you are raising an eyebrow at that decision, but it won’t show from the main part of the room. As long as you’re only seeing this much (or less) of the shower from the main part of the room, you won’t see a shower curtain…

The shower curtain rod will go from the backside of the mural wall to the shower niche wall (which is the wall where my ladder is in the picture below), and it will be just to the left of the ceiling light.

I have been searching high and low for weeks now for a pretty curtain rod that I can use as a shower curtain, and I finally found one that matches the shower fixtures perfectly! And I found it locally, which shocked the heck out of me. But check out how perfectly this matches…

It’s this Cambria Premier adjustable curtain rod in warm gold from Bed, Bath & Beyond, and it matches the Delta Trinsic fixtures perfectly. I know some of you question the whole idea of using a shower curtain in here, but I think it’ll be very nice. The shower is so huge, and I get chilled every time I’m in here working, so I like the idea of having a shower curtain to hold in the heat during a shower. And I also love fabric. Y’all know that about me. I look for ways to add fabric to rooms, and in bathrooms, that can be quite challenging. I’ll almost always choose a shower curtain (a decorative curtain + a functional curtain) over a shower door. Anyway, we’ll see how it turns out. In my mind, I think it’ll look very pretty and add some softness to this otherwise very hard and cold area of the bathroom.

And as long as I don’t make any other really dumb, time-wasting decisions in the next couple of days, I just may have a completely finished shower to show y’all by the end of this week!