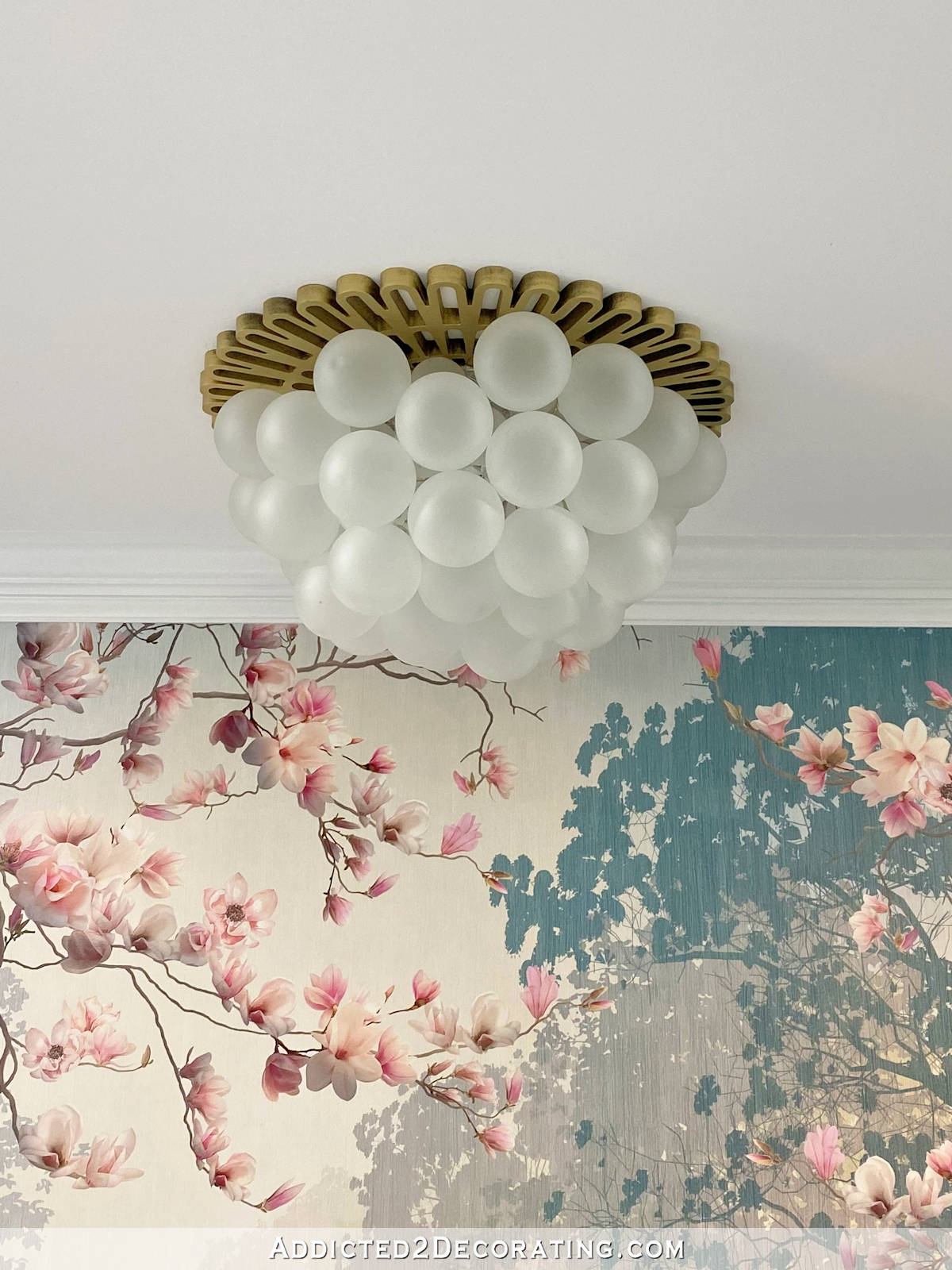 I’ve been dreaming of a glass bubble chandelier over my bathtub for many months now, and I finally have it. This is a DIY light that I made myself, and I did that for two reasons. First, I wanted a large flush mount bubble light (not semi-flush mount, but actually flush mount), and those are virtually impossible to find. But the main reason I decided to DIY this light is that I didn’t want the actual decorative part of the chandelier to have any electricity running to it. I know that’s strange, right?

The reason for that is because this is going over my bathtub, and it’s against building code to put a chandelier over a bathtub. So I had to get a little creative with this and find a way to get the look of a chandelier without the decorative parts that hang below the ceiling being wired. In other words, a person could stand in my bathtub while it’s completely filled with water and touch any part of my chandelier, and it wouldn’t shock them because my chandelier is nothing more than a ceiling mounted decoration hanging around a recessed light. The recessed light provides the light, but it is not touching or connected in any way to the decorative part of the chandelier.

So here’s how my DIY glass bubble chandelier turned out…

And here’s the whole view with the bathtub, the mural, and the chandelier (with an unfinished wall on the left side)…

It’s such a pretty glow of light, which is the perfect amount of ambient light when I want to take a bubble bath at night.

So let me show you how I made this DIY glass bubble light.

First, I started with a ceiling medallion. I purchased this one from Wayfair, and I selected the antique brass finish in the 24-inch size.

That spray paint was perfect, and I had a perfect gold medallion to start my DIY bubble chandelier project…

Here’s a look at the light above the bathtub. As you can see, it’s just a normal recessed light, and I had it wired on a separate switch from the other recessed lights in the room.

It’s an LED light, and the box said that it’s supposed to last for 14 years with regular use, so I shouldn’t ever need to get to the light. There are no bulbs to change, and I’m sure I’ll get tired of the bubble light long before the LED light stops working.

To install the medallion, I used washers, 2-inch screws, and drywall anchors to screw the medallion onto the ceiling through the small holes. I didn’t screw them tight to the ceiling at this point. I left them a bit loose so that I could attach the form onto which the glass bubbles would be hung.

And the form that I used was a flower basket that I found on Amazon.

I planned this chandelier back in the fall of last year (2021). That’s when I bought all of the “bubbles” (which are frosted glass Christmas ornaments), but I wondered for a long time exactly how I was going to attach all of the bubbles.

Then one day a couple of months ago, I saw an Instagram reel from Chris Loves Julia of their bubble chandelier (which cost about $2500) being installed and put together, and when I saw the form to which those glass bubbles were attached, I thought, “Oh my gosh! That looks exactly like a hanging flower basket!”

Next, I used standard size frosted glass Christmas ornaments (about 2.5″) around the top of the basket. I just used the little hangers that come on the ornaments to attach them to the wire basket so that they would snug up to the wire basket as close as possible. This took some patience, especially since the hole on the bottom of the wire basket was too small for me to fit my hand inside. But working slowly and patiently, I got them all attached.

And then I continued with another row, and then another, to cover as much of the wire basket as possible.

Once I had the basket covered up close, then I started adding the large 4-inch ornaments. Again, I bought these last fall at Hobby Lobby when they were all on sale about 40% off. (I would only recommend buying them on sale during the fall/Christmas season, because if you have to purchase them in the off season, you’ll pay a ridiculous price for them.)

To hang the large ornaments, I started out by hot gluing all of the little metal pieces (those metal pieces that the wire hangers insert into) onto the ornaments. That way I wouldn’t have to deal with them pulling off during installation.

Then I made hangers using some 12-gauge craft wire that I bought at Michael’s. I didn’t necessarily want gold. White would have been better, but this was the only color they had, so I went with it. And in the end, it didn’t really show up on the finished light anyway.

Using my needle nose pliers that have a wire cutter on them, I cut the wire to about 3.5-inch lengths, and formed one end into a loop that hooked onto the little wire loop on the ornaments.

Once they were attached, I squeezed the loop together to hold it securely onto the ornament.

And then, still using my needle nose pliers, I formed the other end into a hook that would attach to the wire basket.

Once I hooked each large ornament onto the wire basket, I used my needle nose pliers to squeeze the hook so that it wouldn’t slip off of the wire basket. I won’t lie. This was easier said than done, especially as the light became more and more filled up with bubbles, and it became a very tight squeeze to get my pliers in between all of those ornaments. But I did my best, and it took a whole lot of patience, but I finally got them all attached.

In all, I used about 36 of the small ornaments and 34 of the large ornaments to create the whole chandelier. The ceiling medallion is 24 inches in diameter, so that gives you an idea about the size.

I’m pretty darn excited about how it turned out. It actually turned out much better than I had envisioned, and it fits the needs of this space. It hugs the ceiling, and since these decorative parts aren’t connected to electricity at all, there’s no building code violation. But I still get that pretty chandelier look above my bathtub, and when the recessed light is turned on, it has the prettiest glow of light coming from the chandelier.

And speaking of bathtub, here’s the view from underneath. This is the view that I get of the light as I take a bath in the tub.

And here’s the other direction…

I’m seriously so proud of how this turned out.

Here’s the whole view. Please disregard the unfinished walls in the rest of the room. 🙂

And here are a couple of closer pictures. I tried to get the faucet and the chandelier in one view…

It turned out pretty great, right? I love it!

I actually think my little DIY glass bubble chandelier is much better than the one I had in my original mock up of the room, which was one from Pottery Barn (I think).

Again, here’s how the chandelier looks when the light is turned on. It’s such a pretty glow. This is with the other lights turned on as well…

And this is with the other lights turned off…

That’s pretty good for a DIY bubble light, right? I had tried the bubble light without the medallion before (which you can see here), but I wasn’t really liking it. That’s why I considered some other options, like tinting the bubbles a color to contrast with the ceiling.

But in the end, all it needed was a medallion, and this one in particular was suggested by a commenter on a previous post. I think it’s perfect! And thanks to that medallion, the original frosted bubbles turned out to be perfect. I love that they kind of give the feeling of a cloud above the tub.