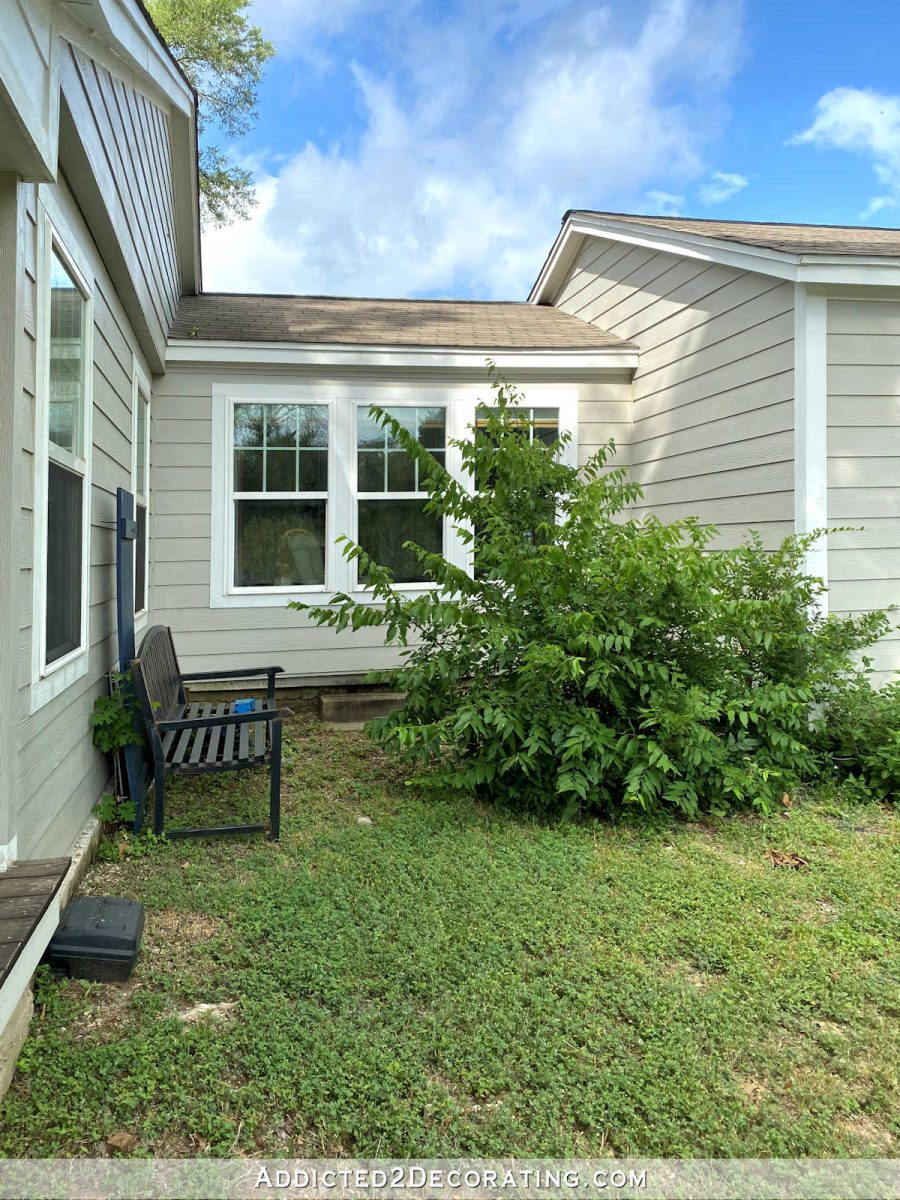 Matt and I had our first adventure yesterday in the new van, and it was amazing! (If you missed the story of our new van, you can read about it here.) Imagine eating inside a restaurant for the first time in 13 years. Y’all! THIRTEEN YEARS!! He was a bit emotional, needless to say. We had a fantastic breakfast at Rosa’s Cafe, then headed to a park by the river (Lovers Leap in Cameron Park, for you locals). It was pretty hot outside, so we ended our outing with a stop at Sonic for some cold treats. When we got home, and I got him situated comfortably inside, he took a sip of his Sonic orange slush and said, “This tastes like victory!” 😀 We were out and about for almost four hours, and it was an amazing time.

I feel like a whole new chapter of our lives has started, and ever since being at Cameron Park yesterday — out in the sunshine and breeze, and surrounded by beauty of nature, I’ve kind of had a bee in my bonnet regarding finding ways to beautify our own property. In the 8.5 years that we’ve lived here, we haven’t done any landscaping on our property. I’ve thrown around some ideas here and there about things that I’d love to do, like have my own walking track around our one acre, but something about our first outing yesterday really made me want to go from the dreaming stage to the serious planning and implementing stage.

And the first place I want to start is in the front of the house with the flower beds along the front of the front porch and the front of my studio, as well as this area that is set back between the porch and my studio. This is what I refer to (somewhat tongue-in-cheek) as our courtyard. It’s a very small area, and it’s clearly not actually a courtyard since it’s wide open to the street. And “courtyard” is a pretty grand term for such a small area. But even though it’s small, I think it could be really beautiful!

The area is enclosed on three sides with one solid wall on the right, and one wall of windows (that’s our breakfast room/sitting room).

The wall on the left has two windows with some solid wall in between. That’s the fireplace wall in the living room. (My one shutter came off during some high winds a while back, and needs to be reinstalled.)

I want the centerpiece of this area to be a water feature, and I want it to be one that we can enjoy while we’re outside, as well as while we’re sitting inside with the windows open.

But what kind of water feature? That’s where I get stuck. I want it to be large enough to look like maybe that area was intentionally created for a water feature, but not so large that it looks out of place with our modest 1948 home. If I go with some sort of fountain, I don’t want anything overly traditional. I don’t want any three-tier fountain, and no peeing cherubs, or anything like that. While I do think that tiered fountains are very pretty, something like this would be way too much for our home.

I also don’t want anything too modern. While I love modern design, I think anything overly modern would look way out of place with our house. Also, I don’t want anything with water falling down stacked rocks or anything like that. All of that seems like overkill for the small area in the front yard of our home.

Most of the water features that have water bubbling out of the top of a rock (or several rocks) don’t appeal to me at all. I can’t put my finger on why I don’t like them, though. But I did come across this one that I thought was very pretty.

That is one of the most natural looking bubbling rock fountains that I’ve ever seen, and I think it’s because of all of the plants around it. I could definitely see having something like that in my front yard. The only thing I don’t like about it is that there’s no shallow standing water for birds to bathe in. But I guess I could design it so that it has a place for the birds to bathe. I really want this area to be a place that draws birds.

But that particular one has way too much going on for my small area. I do love the bowl by itself, though, and I’d love to find a way to use something like that, but without all of the other ponds and concrete elements.

So as you can see, I’m having trouble even narrowing down the exact look I want. Do I want it to look completely natural, like rocks? Or do I want to bring in an obvious fountain element with a concrete bowl or something similar? Which option would be better for drawing birds to that area?

I’ll definitely want to hire a professional to help me come up with a plan for that space (and the rest of the yard), but I feel like I need to narrow down what I want first. I need to have a general idea of what I want the area to look like so that the person helping me with the details can have a jumping off point to start with the plan.

If you were designing my little “courtyard” area with a water feature, which direction would you take it? A totally natural feel with water bubbling up through rocks? Or a more manmade fountain look with something like a concrete bowl with water spilling over the edge? I feel like I could go either way, but I’m having such a hard time envisioning either one of them. Outdoor design is just not my forte.