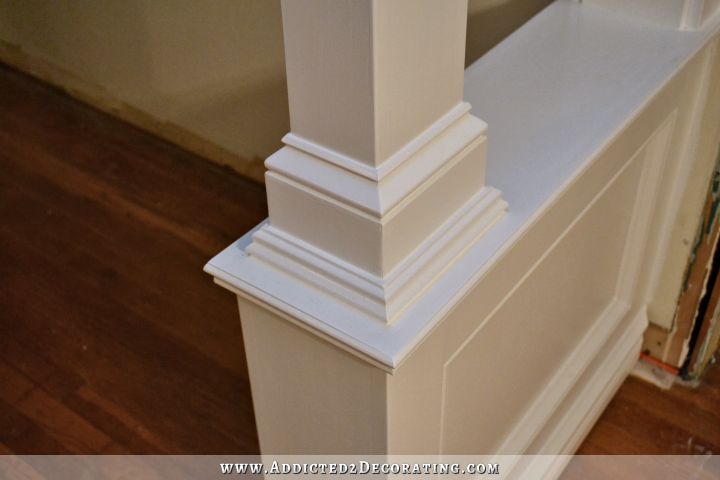 If you’ve been reading my blog for long at all, you know that I’m never afraid of redoing a project that I’ve finished (or almost finished) if I decide it didn’t quite turn out how I had envisioned it in my mind. It doesn’t matter if I’m halfway through, 90% of the way through, or if it’s been done for a year. If I’m not completely happy with it, I have no problem redoing it as long as my budget allows.

I did my entire kitchen remodel…

And after living with it for about three years, I decided that the color and some of the details (like the corbels) just weren’t quite right, so I made some changes.

I know if I polled my long time readers, the do-over that most of you miss the most would be the birds and branches mural on the entryway wall (at least, that the project that gets the most mentions in comments).

I really did love the direction of that entryway, and that mural was a very fun project to do. But in the end, I’m glad I redid it.

My current entryway is much more “me” than any of the other iterations. (Yes, I know it’s too busy for some, but it’s mine. And I love it. 😊 But it is getting a small update, which I almost finished yesterday, but will need just a couple more hours to finish up today.)

And I just have to shake my head and laugh when I look back at the first version of my living room. I still can’t figure out who the heck I was decorating for, but it doesn’t seem like I was decorating this room for myself.

My current living room is like a breath of fresh air (at least for me) compared to that first one, and compared to all of the interim iterations.

If I were to list and show pictures of everything I’ve done and then redone in my house, this would probably end up being the longest blog post I’ve ever written. But the bottom line is that I don’t regret any of those do-overs…

With the exception of one.

There is one project that I worked hard on, finished, and absolutely loved. And then I convinced myself that it needed to be ripped out and redone. Can you guess which project I’m talking about?

It’s the pony walls and columns that I built to separate the music room from the entryway/living room area.

Do you remember those pony walls and columns? I was so proud of how those turned out.

The sad thing is that the picture frame molding ended up looking WAY too busy in a room with so many doors and windows (that wall detail is always better in rooms that have more uninterrupted wall space), so I ended up ripping out the picture frame molding in the entryway and living room. In the end, I ended up ripping out those pony walls and columns for no good reason at all.

I think about that often, and it’s the one do-over that I actually do regret. I wish I could have seen the pony walls and columns in a finished room, but I ripped them out and redid them long before any of these rooms were ever completely finished. I’d love to see how they look with the current finished room, but all I can do is imagine. Honestly, I think they’d look beautiful in the current rooms.

The frustration is that I loved what I originally built, and the entire reason for ripping it out and changing it ended up being something that I didn’t like in the end. So after all was said and done, this change was completely unnecessary. Today, if I had the opportunity to choose one or the other and have my favorite of the two without having to spend any time or money to have it, I’d choose the pony walls and columns.

It’s always frustrating to have a regret, especially one that costs time and money. But with all of the things I’ve redone in this house, I think having only one regret is a pretty good average. 😀