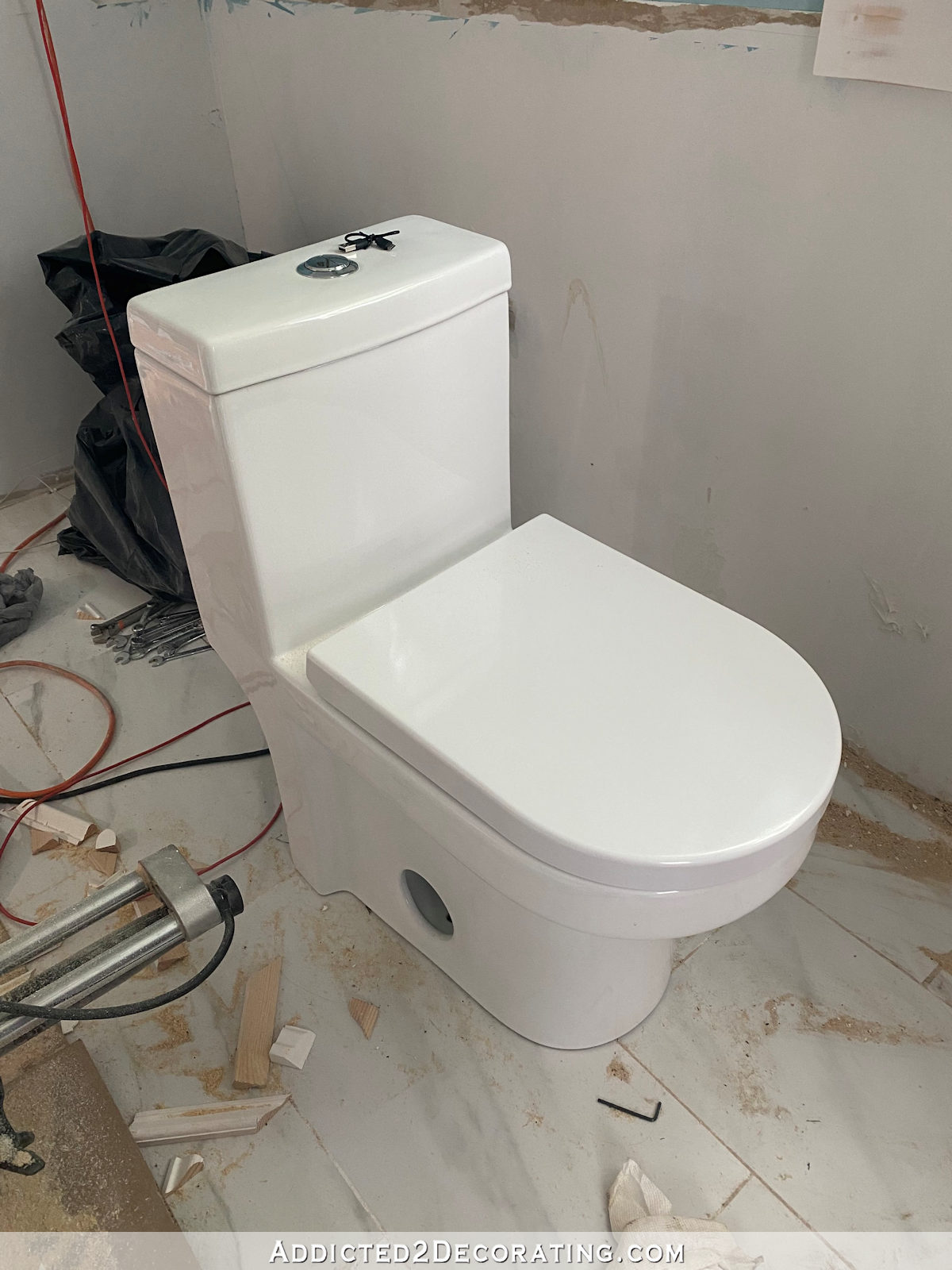 Most of you will be happy to know that I’m refocused on the master bathroom now. I’ve worked on it for three days in a row, which is the most I’ve done since we bought the wheelchair van and Matt has been enjoying life outside of our house. And while there’s no way I’m going to meet my original goal of having it done by the end of June, I will say that the last four weeks have been totally worth the delay. But now I’m refocused, and determined to work diligently to get this room done as soon as possible.

Unfortunately, while I’ve made some progress in other areas, I had a step back with the toilet that I bought. I had to remove it, and now it’s just sitting in the room while I decide what to do with it.

When I was searching for a toilet, I wanted one that wouldn’t stick out past this wall…

That gave me 27 inches of depth to work with. Well, finding a toilet with an elongated bowl that is 27 inches or less from back to front isn’t easy. After searching and searching, I finally found the toilet pictured above, which is all one piece with a small tank. I had never heard of the brand, and I wasn’t thrilled with the idea of ordering a toilet online, but it was the right size with an elongated bowl, so I went with it.

I thought it would be perfect, but once it was installed, it looked way too small. It looks like a toilet that belongs in an elementary school. Plus, it doesn’t work. It WILL NOT flush. Unfortunately, I’ve had it too long to return it, so now I don’t know what to do with it. I might see if I can give it away (it’s literally never been used), and see if someone else can find the problem, fix it, and use it. It wasn’t a cheap toilet!

So I ordered a new one (an actual brand that I know — Delta — that was delivered to my door by the local Home Depot), and as soon as I get finished with the walls, I can install the new, normal, adult-sized toilet. And hopefully it will work. Unfortunately, in order to stay within the 27-inch depth, I had to get one with a round bowl. Ugh. I really don’t like round bowls. But I’d rather have an adult-sized toilet with a round bowl than an elementary school-sized toilet with an elongated bowl. 😀

As far as the walls go, I’ve spent a ridiculous amount of time caulking everything in hopes that the walls would be ready to paint today.

But after finishing up the main part of the caulking last night around 11:00pm, I realized I have even more caulking to do today. These wall panels are formed using 1″ x 4″ boards installed vertically, and then 1″ x 5″ boards along the floor and the ceiling. Then the inside of those frames are trimmed with base cap.

Once those are installed, I always caulk between the 1″ x 4″ board and the base cap. That area is pretty deep and requires a lot of caulk, but I prefer the way it looks (almost like one piece rather than two) once it’s caulked.

Well, I don’t know if I got a bad batch of caulk, but it seems to have shrunk much more than usual as it was drying. Even though I used a very liberal amount of caulk and made sure that the whole space between the two pieces was filled completely with caulk, I walked in this morning to see that all of these little voids had formed as the caulk dried and shrunk. Can you see them?

The problem with those is that if I take a gamble and just paint them, there’s a chance that the paint will fill them in nicely and they won’t be seen. But there’s also a chance that those voids will hold onto the paint just long enough for me to think everything is fine, and then about 10 minutes later (and after I’ve already walked away and quit paying attention), the paint will start to run out of those voids, and then I’ll have runs and drips of paint dried in those spaces. Ask me how I know that. 🙂

So as much as I hate it, I think all of these areas are going to need a second application of caulk before I can paint. UGH!! I really thought I’d be ready for paint as soon as I started working today, so this is really a pain and a setback. But I’d rather have it done the right way the first time, because having to sand off paint drips, especially in areas like that, is a much bigger headache.

I also still have to caulk all of these little areas on two of the walls, but those are no big deal. That’s a standard caulk job that will dry quickly and be ready to paint in about 30 minutes.

I also got several samples of pink paint so that I could choose one for that large panel on the side wall of the toilet area. None of them really matched 100% to any of the pinks in the mural, but I did really like this one, which is Glidden Lady Pink.

This is the picture of it from the Glidden website…

That looks a lot different from the swatch taped to the wall, so I hope it will look nice. I don’t think I’ve ever used Glidden paint before, so I hope I don’t regret it. I’m generally pretty loyal to Behr for just about everything unless I want a dark matte finish, in which case I always use Benjamin Moore Aura. So I’m hoping I won’t be disappointed with the Glidden quality or color. But it’s just paint, right? 🙂

The wall that gets the pink paint won’t really be visible unless a person is actually in the toilet area, or unless they’re standing right in the doorway between the bathroom and the home gym. When standing there, this is the amount of that wall that’s visible.

So it will just be a little peak of pink from the doorway. Otherwise, the visible walls in this area will be white to match all of the trim and wainscoting in the rest of the room.

Well see how it goes today, and how fast the caulk dries, but hopefully I can get this area finished today and get the new toilet installed and show you how it looks tomorrow. Having this area completely finished will be a huge relief!

23 Dollar Tree HACKS to UPGRADE your home FAST! 🪄🏡
How to Test Pool Water | The Home Depot
Creative Ways To Use a Homer Bucket | The Home Depot with @food52
DIY Home Decor Ideas And Hacks You Actually Want To Make
Hallway Bathroom Changes Coming